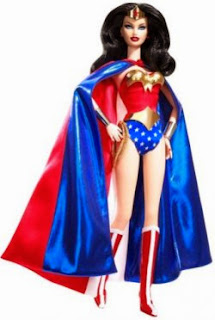 What do you get when you combine your favorite comic book heroes with your favorite doll? These superhero Barbie dolls or course!

I've selected some great superhero Barbies for you which will let your inner geek come out to play with your inner 'girly girl'!

Whether you prefer Supergirl or Wonder Woman or someone completely different I'm sure you'll appreciate all of these cool dolls that I've selected for you......... I've even included some of the superhero adversaries for you too, after all life as a superhero would be boring without some 'bad guys' to pursue!

The one thing all of these Barbies have in common is that they don't stand for any nonsense so whether you want to yell - 'girl power!' or 'Barbie power!' these dolls are great ones to collect. 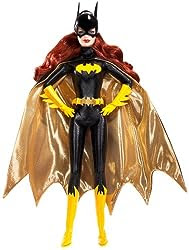 This absolutely stunning Barbie doll is a pink label one from the DC Superheroes Pop Culture Collection range and was released in 2008. As you can see, aside from the costume, Barbie has done away with her famous blonde locks for cascading auburn waves which combined with her bat ears mask makes for a very striking look.

The figure hugging Batgirl 'suit' is accessorized with not just the yellow bat emblem, gloves and boots but also a very arresting gold lined black cape as well.   I think the Batgirl above is the best of the Barbie Batgirls that are available, but there are a couple of others that have been released which I thought I should show you as well. 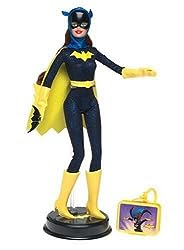 Barbie as BatGirl: 11.5" Collectible Doll with StandCheck Price
This Barbie Batgirl comes with her own stand which is great for a collector, but personally I don't think she's a patch on the first one as far as looks go.

Barbie as Batgirl on MotorcycleCheck Price
This doll was released as an exclusive to Toys R Us and although you already know my favorite I must say I do love that the motorcycle is included with this doll.

Black Canary Barbie DollCheck Price
This Barbie doll is part of the black label collection which means it was released for adult Barbie doll collectors. The Black Canary is well known to lovers of DC Comics and is a superheroine who used her martial arts skills to earn the reputation of one of the greatest fighters of the DC Universe.

Not only does this Barbie doll wear the Black Canary's disguise, she also has a 'don't mess with me' look on her face giving Barbie a whole new attitude - or is that just my imagination?

Barbie Collector Classic Catwoman DollCheck Price
There are a few different Barbie versions of Catwoman available, but this one has to be my favorite as it's based on the television series that first introduced me to Catwoman. This doll looks like a cross between Julie Newmar and Lee Meriwether the very first two actresses to play Catwoman.

Now I know that Catwoman wasn't actually a superhero, but didn't you want to be her at one stage in your life? Although an adversary of Batman, Catwoman developed quite a following of her own as a favorite anti-heroine.

As I've said there are other options for your own Catwoman Barbie if you don't want a nostalgic walk down a Catwoman inspired memory lane as you can see below. 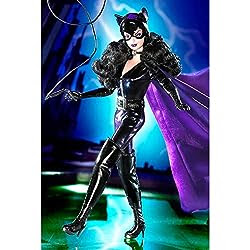 Barbie as CatwomanCheck Price
This is another great doll that shows a lot of feline attitude and is a very close second in my mind to the one above. I would be happy with either I must admit!

Barbie As CatwomanCheck Price
This is probably my least favorite version of Catwoman although (no surprise) I think it's my hubby's favorite! I'm no Eartha Kitt or even Michelle Pfeiffer, but I still believed that if I was more disciplined with my diet and exercise I could still be Catwoman for Halloween until Halle Berry took on the role - I can't compete with that body!

Luckily Barbie's figure is also pretty cool which is why she can crack the whip in style while wearing this skin baring version of a catsuit!

Barbie as Elektra from Marvel ComicsCheck Price
Barbie has a very sassy look in this 'take no prisoners' outfit and is perfect in the role of a ninja assassin. The outfit that Barbie is wearing here is quite faithful to the comic book version of Elektra.

As both villain, superhero and love interest to first Daredevil and then Wolverine Elektra has certainly had a very interesting comic book life which is why she'll certainly be a talking point in your Barbie collection.

Barbie: DC Comics - Harley QuinnCheck Price
This lady's no superhero, shes a crazy super-villain instead! Originally Dr Harleen Frances Quinzel, an Arkham psychiatrist she fell in love with the Joker and becomes his on/off sidekick.

As well as being a high achiever in college earning herself top marks in academia, Harleen was also a talented gymnast which is where she gets her agility. After Poison Ivy befriended her she injected her with a serum which gave Harley Quinn immunity against a lot of different toxins as well as giving her almost super strength and speed. 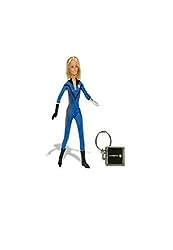 Sue Storm along with her brother, future husband and his best friend were exposed to a cosmic storm and found themselves with a range of powers. Sue's initial power being the ability to turn invisible hence she became The Invisible Woman. However as she got used to using her powers she discovered that she could also make other people invisible and control force fields of invisible energy which has been proven to be a very useful super power.

Poison Ivy is usually portrayed as one of Batman's super villains, but she's also close friends to Harley Quinn so if you're thinking of buying either doll they do look good together!!!

Poison Ivy gained her immunity to plant based toxins and other plant related powers after her college professor (who has seduced the previously shy Seattle girl) injected her with a number of poisons and toxins as an experiment one which leaves her quite mad and prone to violent mood swings.

Supergirl Barbie Collector DollCheck Price
I think this doll (released in 2008) has to be the best Barbie Supergirl I've seen. Supergirl was actually Superman's cousin Kara and shares the same powers as him, along with the same vulnerability to kryptonite.

I remember enjoying the 80s movie Supergirl, but in the comic world she didn't prove popular enough and was 'killed off'. Her story has since been resurrected this millennium along with the release of this rather cool looking Barbie.

Now the collectors doll above isn't the only Supergirl Barbie you can get, there is another which I'm including for you here.

Personally I think that this Barbie doll just looks like a cheap version of the silver label doll above, but if you're looking for a doll to play with as opposed to 'collect and display' then this option is certainly a lot nicer to the wallet and with the symbol on her chest and her cape it will lead to a lot of superhero style play. 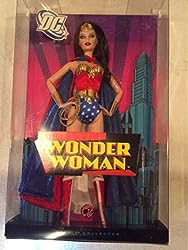 Barbie Collector Wonder Woman DollCheck Price
This has to be my favorite Wonder Woman Barbie doll to date. This is a pink label Barbie that was released in 2008 as part of the Pop Culture Collection and it is stunning.

You can see this doll is my favorite on this page as I've used the image for the introduction too! There's just something magical (to me) about Wonder Woman and somehow this doll has managed to capture it - her strength, beauty and absolute sureness in herself.

Who didn't love Wonder Woman? I think the makers of Barbie very obviously did when they created this model, although they have made other Wonder Woman Barbies as well. 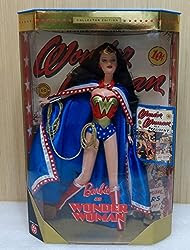 Barbie as Wonder Woman DollCheck Price
This Wonder Woman Barbie doll is also really nice and I do love her cloak. She's just not as majestic and striking as the one above in my opinion, however she does still show signs of that 'can do' attitude that our favorite Amazonian superheroine has.

Barbie as Wonder Woman DollCheck Price
This doll is probably my least favorite one, not only is she sans-cloak but she also looks more like Barbie in dress up than a fearless warrior for justice and peace. Well that's what I think anyway, but I could be a little biased as I'm a Wonder Woman fan from way back to the Lynda Carter days where we would spin around chanting Wonder Woman and secretly hope that we too could change like Diana Prince!