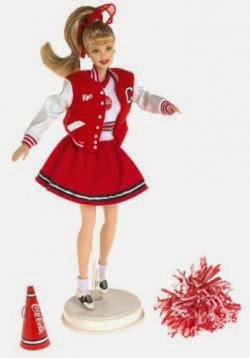 'C'mon everybody let's do a cheer for two fantastic pop culture icons - Coca-cola and Barbie!'

Let's take a page out of this featured cheerleader who also happens to be one of the collection of coke inspired Barbie dolls that you can get. I only discovered these dolls recently (thanks to a Pinterest board in fact) and I couldn't believe that I hadn't come across them before because (as regular readers will know) I love both Coca-Cola & Barbies!

There's some vintage styled Barbie dolls in this range which seems appropriate considering that coke first became popular way back then! My favorite are the retro 50s inspired dolls, however, there's just something about the idea of popping down to the diner with your friends and enjoying a cool glass of coke!

Let's take a casual stroll and admire these fine dolls in more detail .........

These three Barbie dolls are part of the Coca-Cola Fashion Classics series and are wearing Edwardian style fashions as they enjoy their delicious and refreshing beverages! 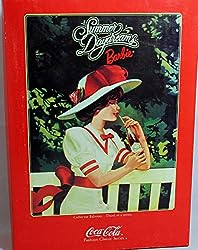 This doll was actually made using an image from a 1913 Coca-Cola calendar, although I can't find a reference as to who the actual original model was!

I love the use of the parasol and those gorgeous t-strap shoes, I think both of these elements just add a certain something to her historical wardrobe.

Another feature which I think is pretty special is the red and white striped straw in her coke bottle!

Coca Cola Barbie - After the WalkCheck Price
This doll is wearing an outfit that is based on 1916 fashions, to me though it looks like she's about to go and picnic with friends besides a river to watch a regatta. According to Mattel, however, this doll has apparently just come back from a walk and is about to enjoy a glass of 'the real thing'.

Barbie Coca Cola Soda Fountain Sweetheart DollCheck Price
This gorgeous Barbie doll is based on a 1907 ad for Coca-Cola, the hat is certainly in keeping for that period while I think the red polka dots on the dress add a touch of fun to the idea of enjoying this popular drink.

The holder that her glass of coke is held in is reproduced in authentically historical detail as well.

The next series of dolls that I have for you are called the Coca-Cola Barbie Series and there are seven dolls that are part of this series which is based on retro 50s fashions which I think look so cool in this red and white theme.

You'll feel like you're on the set of Happy Days when you enjoy these dolls, back in the fifties enjoying sipping cokes and eating fries with all of your friends. 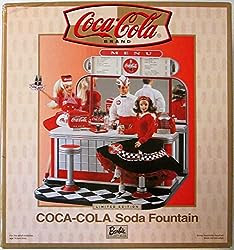 Barbie COCA COLA SODA FOUNTAIN Playset w Shipper BoxCheck Price
The first thing in the series isn't actually a Barbie, but is actually a 'play set' which is designed to display some of the other dolls in the series beautifully.

This is a replica soda fountain with a couple of stools for dolls to sit on and space behind the counter for Ken to serve up those glasses of coke everyone enoys. 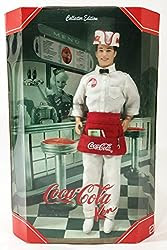 Mattel Barbie - Coca Cola Ken DollCheck Price
Coca-cola Ken gives the Coca-Cola Barbie something to dream about as he serves up her favorite soda with a special smile just for her!

Dressed in a white uniform with a red Coca-Cola apron Ken looks like the type of employee any 50's Soda Fountain owner would love to employ! 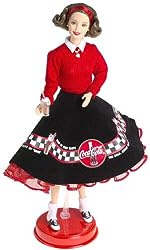 Coca-Cola Barbie #2 2000Check Price
I love the look of this doll dressed like a classic 50's teenager (except with the coke advertising around her skirt that is) this Barbie is a brunette who is about to enjoy a coke float which makes me feel quite jealous as that's one of my favorite treats from childhood! 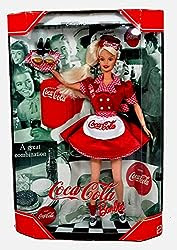 1998 Barbie Collector Edition: Coca-Cola Barbie as a Waitress.Check Price
Dressed as a waitress in this trip down memory lane is this gorgeous Coca-Cola Barbie doll. I love the tray that she's carrying out to customers, but I must admit I would've liked to see her with roller skates on instead of her black and white saddle shoes.

This doll also came in a brunette version which I haven't been able to source for you at the present time as it is a long rarer. When this series was first released the brunette Coca-Cola waitress was only available through Disney World in Florida, these days ebay is a great place to look for her.


If you're after a 'sportier' Barbie then you might like the next two dolls that were also part of this series - we're talking about a cheerleader and a member of the marching band....

This Barbie Majorette has striking dark hair and looks very happy to be leading the parade with her baton in one hand, her uniform complete with tall hat and pom pom decorated shoes looks right at home on her. 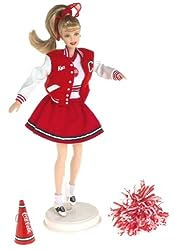 Barbie Coca Cola CheerleaderCheck Price
This Barbie doll is the cheerleader from the introduction picture and loves encouraging you all to drink coke!

Her blonde hair is in a ponytail and she has that fresh, all American girl look about her ....... she's also wearing Ken's letterman jacket which I think is a great extra touch.


Whether you're a fan of Barbie dolls or Coca-Cola I hope you've enjoyed this little jaunt with me. I've written other pages about Barbies which you might also find interesting, feel free to them out on my dolls page.
Posted by Lou16 at 10:02 PM