Firemen and Lego Join Together with Lego City's Fire Service!

Have you seen the Lego City Fire Sets? These sets contain Lego City's real life heroes - their fireman and of course you need fire trucks when you've got fireman!

There's something special about firemen - real life heroes, so when combine fireman and Lego together you know that you've got a great toy on your hand! My dad was a fireman when I was growing up and it was fantastic on the days we could pop into the Fire Station and sit in the Fire Engine or slide down the Fire Pole.

Most children don't get the chance to do that in real life, but with these Lego City Fire sets they can do all of these things by using their imagination.......and the lego sets of course! 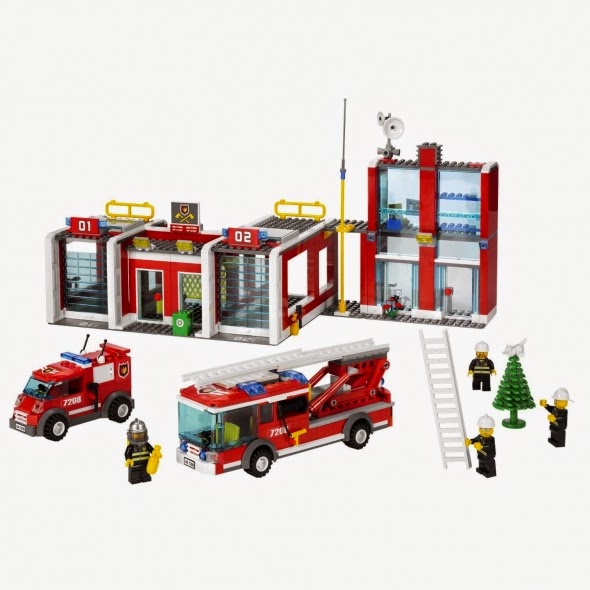 The intrepid firefighters of Lego City need to have a base of operations and Lego City’s Fire Station is that place. Lego City’s Firestation measures over 17″ (43cm) and over 9″ (22cm) tall and it comes complete with -


and so much more….the firefighters do need a lot of equipment to do their job and there’s pleny on hand with Lego City’s Fire Station including - 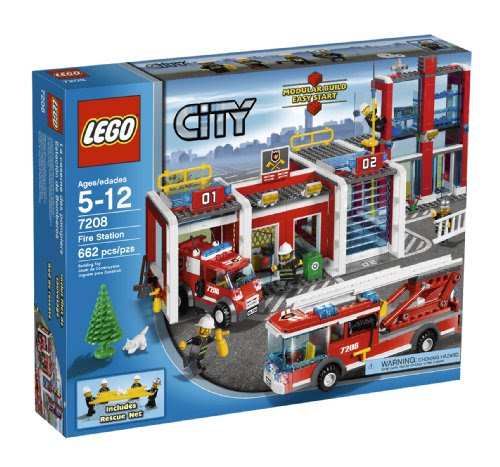 LEGO City Fire Station (7208)Check Price
This Lego City set contains 662 pieces and has a recommended age of 5-12 years. It also contains a cat and a tree so that you can get your firemen to rescue a poor cat for someone and flowers – I’m guessing these were a gift from a grateful person who was carried out of their burning home via the Fire Engine’s ladder.

An Essential Member of the Lego City Fire Service!


If you don’t have the Lego City Fire Station set yet, then you could start with this Lego City Fire Truck, it really does look like a real fire engine and comes with 2fantastic firefighters.

The set is made up of 214 pieces and is recommended for the age group 5+. Once you’ve assembled your fire engine you can raise the ladder to reach up to the top floor of buildings. If you’re going inside though don’t forget your breathing apparatus which is on the truck waiting for you. All of the best equipment has been supplied to Lego City’s Fire Service because Lego City really cares about it’s citizens. 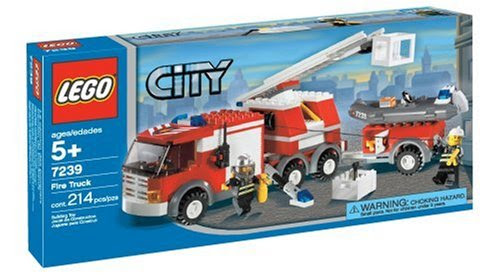 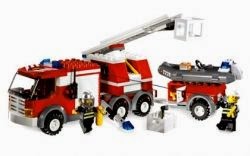 The fire truck looks just like a real one and all of the equipment needed is on board. The white vents on the side of the fire engine are actually doors that reveal a crate with the oxygen mask and tank kept safely inside. There are also fire extinguishers which are really handy when they Lego City Fire department have to go to a car fire or when Mrs Jones leaves her cooking unattended…….again!!

The fire hose on the side of the fire truck is nice and long just in case someone tries to set fire to a tall building, why only last week a prisoner wasn’t frisked and when he was left alone in the interregation room (on the second floor of the Lego City Police Headquarters) he tried to light a fire with some matches he was hiding – the adrenalin never stops at Lego City – the city that never sleeps!

Not only is there a fire truck in this lego set, but it also pulls a trailer behind it that carries a boat! While not quite up to the Fire Ship standard this small rescue boat has come in very handy on a number of occasions.


Lego City’s Fire Chief has his own Off Road Truck Set which is yours to own! The Fire Chief has a very nice red pick-up truck that pulls a fully equipped trailer along. Although the Fire Chief is usually shuffling papers he likes to be prepared for all eventualities, I mean only the other week the main fire engine was out to a fire when there was another blaze on the other side of the City, quite out of the way up some rough tracks so the Chief rushed into action. Just between you and I he absolutely loves being hands on every now and again!

Some of the equipment in his trailer include a chainsaw, axe, fire extinguisher, walkie talkie, breathing equipment and searchlight.

This Lego City set contains 131 pieces and is recommended for ages 5-12.


This 388 piece Lego set contains one of Lego City’s Fire Service’s Fire Truck complete with a boat on the back. There is also a quad bike and three firemen included in the set.

Use the quad boat to isolate exactly where the blaze is and he can contact the fire crew on their walkie talkies and send the appropriate truck. The fire truck in this set is perfect when there’s a blaze on board a boat as the crane can lower the Fire Departments inflatable boat (it really floats!) into the water and the firemen can be on their way to put out the blaze and rescue anyone who’s on the vessel. 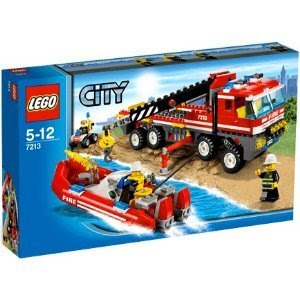 Inside the box this set comes in numbered bags (like a lot of Lego sets seem to be doing now) which makes for an easier and quicker assembling.

Personally I love this as when it’s fully assembled it’s time for the imaginative play that I love!


This is a very basic set that only contains 46 pieces, it’s great if you don’t already own the Lego City Off-Road Fire Rescue set, but if you do then you don’t really need this addition. 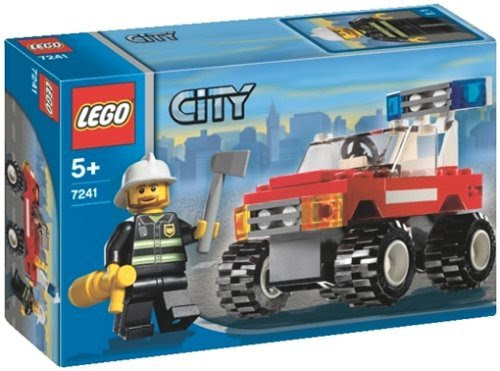 Contains – a basic 4×4 truck, fireman and a few tools.


Not all fire departments are lucky enough to have a helicopter, but Lego City does! There are wildfires outside of Lego City sometimes and they can cause utter devastation if not put out quickly. While the fire crew are trying to get to the source of the fire the fire helicopter and it’s pilot are galvanized into action – filling the huge bucket at Lego City’s lake and then depositing it over the flames……..sometimes Lego City’s mayor is asked to lend the helicopter to other areas that are facing wildfires. 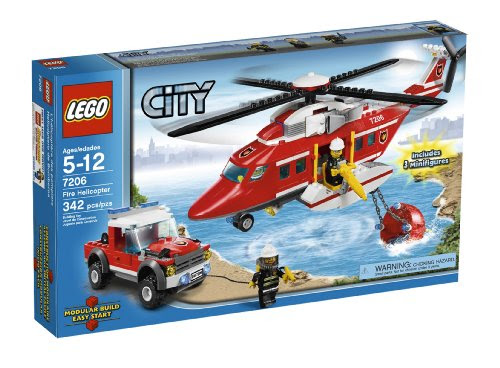 Included in this 342 piece Lego set is -


Lego City’s fire ship is essential to keep everyone safe on Lego City’s harbor! It’s water cannons can put a blaze out in no time at all while it’s dingy can be easily launched to help to pull people out of the water. It’s hard to remember what a problem it was dealing with a ship on fire in the harbor before this Fire Ship was part of the Lego City Fire Department! 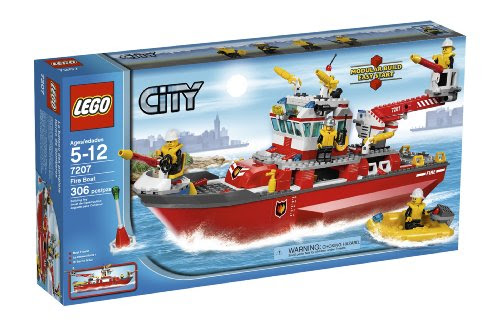 The actual fire ship measures over 16″ (40 cm) long and over 11″ (27 cm) tall and has six water cannons on board along with a 360 degree rotating fire-fighting boom.

The dinghy included even floats!


When there’s an emergency the one thing you can never have too many of is firefighters! This is a very basic set that makes a lovely compliment to any of the Lego City fire sets you may already own.

It is a basic 25 piece set that contains a firefighter minifigure and tools. 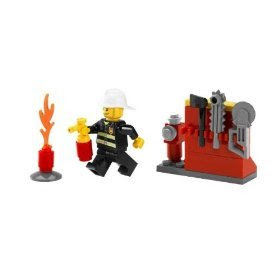 The fire tools in this set includes an equipement rack, fire hydrant, fire extinguisher, axe, chainsaw and ice saw. A little extra ‘surprise’ in this Lego set is the inclusion of a small fire which is sure to add a smile to a child’s face and put their imagination into overdrive.
Posted by Lou16 at 10:20 PM