Which Superhero Bathrobe Would You Wear?

There are some gorgeous superhero bathrobes on the market that any fan would love to wear. I love snuggling into my bathrobe to keep warm and if it has my favorite superhero on it, well what could be better?

As well as being really cool bathrobes for yourself these superhero robes are also a great gift idea, after all who doesn't need a robe? A practical gift idea that is also really cool .......... although I could see them not wanting to take these off which might not go down so well if they work in a rather conservative environment - a suit with a Superman bathrobe over the top probably isn't the best attire for an accountant. A pilots cap, uniform and Wonder Woman robe would also probably not instill confidence in passengers going on a flight!

If you love the Dark Knight himself then you are going to fall in love with this black Batman bathrobe.

As you can see from this image the Batman robe is black with the yellow Batman logo on the back, what you can't see from this image (although feel free to click on it for more views of the bathrobe) is the front of the robe. On the upper left chest of the robe it has the word Batman in the same yellow as the logo with a bat behind the word just like the Batman symbol itself.

This bathrobe is a soft, plush 100% polyester robe which is a material that makes you want to snuggle into it especially on a cold night in fact it's perfect for curling up on the couch in drinking hot cocoa while watching a Batman movie or two.

If you're looking for Batgirl or you just want to buy a Batman bathrobe for a lady then look no further that this hooded robe - I love the hood feature on the robe, don't you? 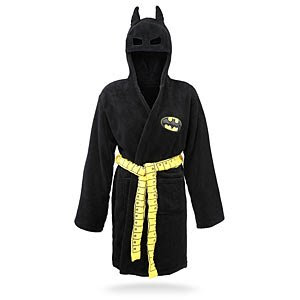 This Terry Cloth Green Lantern bathrobe is perfect for any protector of peace and justice to wear and I'm sure anyone who's a Green Lantern fan would love this robe as a gift.

This robe is made from 100% cotton and being a terry cloth robe it's lovely and warm and ideal for wearing after a shower or bath. It's the beautiful Green Lantern green with the symbol both on the back of the robe as you can see above as well as on the upper left chest area on the front of the robe. This superhero bathrobe also has a black trim which I think really sets off the robe wonderfully - I'm not a huge Green Lantern fan myself, but I'm loving the look of this bathrobe!

You know I've always thought that if I could do all of the cool things that Peter Parker could do it would almost be worth getting bitten by a spider - don't you think?

If you're a Spiderman fan (or are looking for a gift for a Spiderman fan) then I've found not just one, but two Spiderman bathrobes to choose from. Personally I prefer the classic blue and red Spiderman design, but I know lots of people who like the darker version of black and silver - which will you buy? 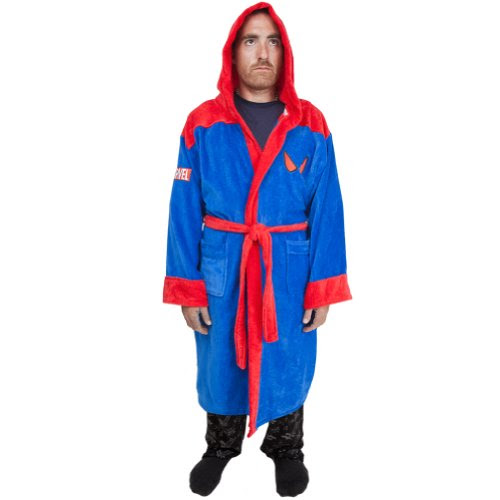 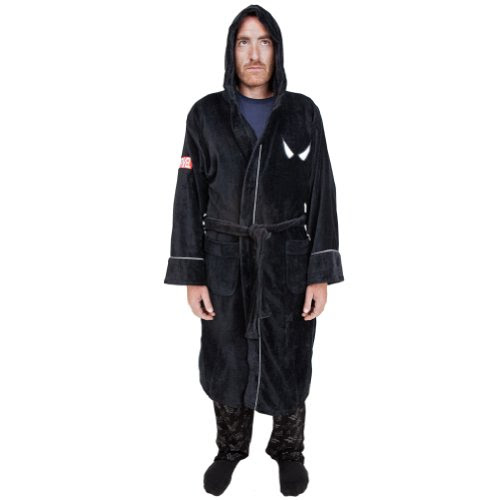 Which Superman Robe to Choose?

Is it a bird, is it a plane? Superman is the superhero I remember growing up to, yes I watched Batman on television, but going to the movies as a child it was Christopher Reeves as Superman so I have to admit out of the guys he's the superhero that I always think of first!

I guess I'm a traditional kind of girl because as with the Spiderman robes I prefer the classic coloring again. To me Superman should be blue, red and yellow, but I'm sure the black and silver one will also prove popular with fans.

Now when it comes to superheroes Wonder Woman was definitely a childhood hero of mine and that's because she was the only female superhero I knew ...... until the Supergirl movie came along, but Wonder Woman was way better!

As a young girl Lynda Carter brought Wonder Woman alive for me and the number of times myself and some of my friends would spin ourselves around chanting 'Wonder Woman' are too many to count! I would love this Wonder Woman robe and I also know a number of other 'girls' who'd love one too!

I think that my next birthday I'll have a spa day with some of my close friends and I'll buy us all Wonder Woman robes to wear instead of the spa's 'boring' plain, white ones!

Which Superhero Bathrobe Do You Want to Wear?

Everyone must have a favorite superhero, who's yours and would you like one of these cool superhero bathrobes representing them?
Posted by Lou16 at 12:18 AM