Bathrobes that Geeks Will Love

These bathrobes are perfect for the geek in your life from superhero bathrobes to a Jedi bathrobe, Star Trek bathrobes and more. These bathrobes certainly wouldn't look out of place on any of the characters from The Big Bang Theory so fans of this show might enjoy some of these selections as well.

I think everyone deserves a nice bathrobe and if you can find one on someone's favorite character or hobby then you're off to a great start. I know many self confessed geeks who would love these bathrobes, the only problem comes with deciding which one they like the most!

Let's have a look at the bathrobes I've compiled for your favorite geek, although I should let you know that even non-geeks could enjoy some of these bath robes.

Superheroes are loved by everyone, but the geek in your life will have quite a few of his own thoughts with regards to his favorite superhero. You only have to listen to an episode of The Big Bang Theory to realize that identifying your superhero is nothing, those television geeks take it to a whole new level!

For all of the superhero robes that I've been able to source check out this page - Superhero Bathrobes.

If you know their favorite superhero then you'll want to get them that particular robe, but I have to say that superheroes are only as good as the villains that they're up against which is why I love that I've managed to source a Joker bathrobe for anyone who enjoys Batman.


Feel The Force & Boldly Go Where No Man Has Gone Before

I enjoyed the Star Wars movies, but I loved the classic Star Trek television series and it appears that geeks are divided on the merits of each of this sci-fi franchises let alone the individual Star Wars movies and Star Trek series from original series through to Deep Space Nine.

Luckily it doesn't matter which you prefer you can get bathrobes to celebrate and if you don't like either we also have Doctor Who bathrobes available.

A Bathrobe That Can Boldly Go Where No Man Has Been Before!

If your inner geek is also a Trekkie (or you're buying for a Trekkie geek) then these bathrobes are perfect, all you have to decide is whether you're Captain Kirk, Spock or Scotty.......... yes you can get all of the different colors with these Star Trek bathrobes. 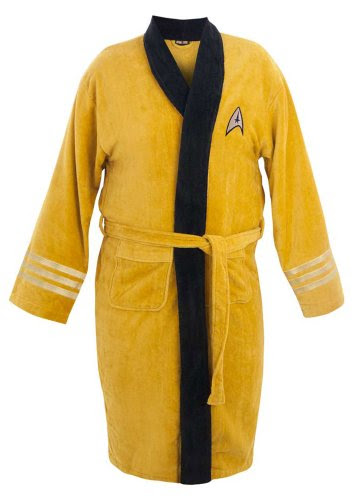 They are all made of 100% polyester fleece (which means they're very warm and comfy) and have the Star Trek insignia on the chest.

Absolutely awesome gift idea for any fan of this classic sci-fi series.

Of course some people prefer the Next Generation Star Trek instead of the original series and if that's the case then we've got you covered! I've also found a woman's Star Trek robe, although to be honest the 'so-called' men's robes are, in my opinion, really unisex! 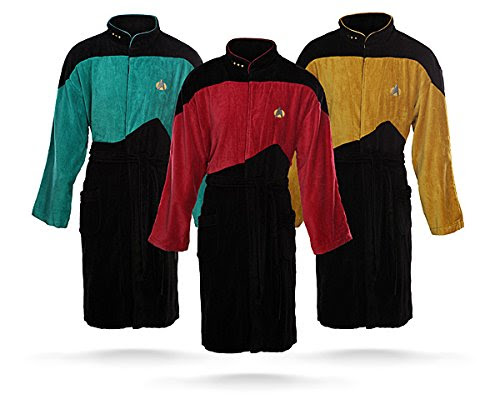 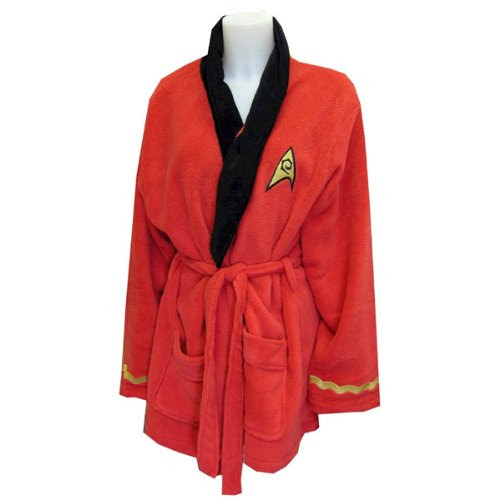 The Force is Strong with These Bathrobes!

If you're a Star Wars geek then you'll love the selection of bathrobes I've found for you here and there are certainly lots to choose from including a Jedi bathrobe, Chewbacca bathrobe, R2-D2 robe and many more. Let's explore the plethora of Star Wars bathrobes available to buy online. 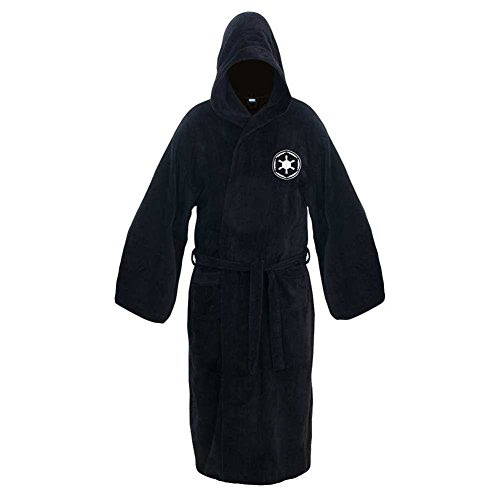 This Darth Vader bathrobe would be great for my hubby as he has the 'Luke, I am your father,' routine down pat, but to be honest it would probably drive me nuts if he said that every morning.

Luckily his Yoda impersonation is just as good and I prefer it so a Yoda robe it might have to be! 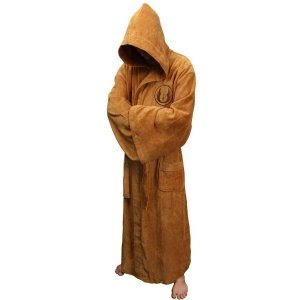 This Jedi bathrobe is made from a soft 100% polyester and when you put the hood up it is so warm and snuggly you'll never want to take it off!

Even if it wasn't a Jedi robe a long and hooded robe is always a cozy choice especially in the middle of winter! 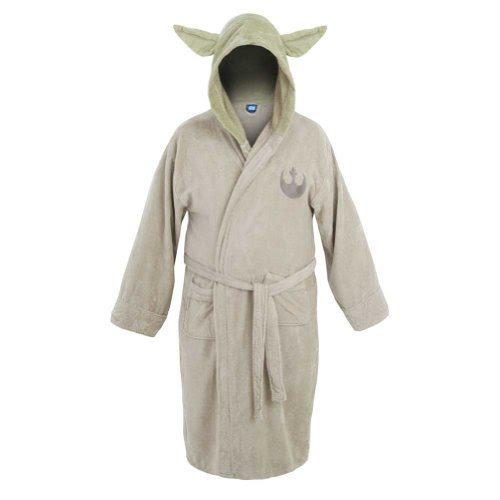 The Ultimate Time Lord is Simply Known as The Doctor

If you prefer the British sci-fi television series to the big Star Wars and Star Trek franchises then you'll be happy to know that you can get bathrobes to celebrate this as well, after all it has been followed eagerly by fans around the world for fifty years!

The TARDIS Robe & Other Doctor Who Robes

Have You Found A Cool Geek Inspired Bathrobe Here?

I hope you've enjoyed my selection, be sure to bookmark this page as I'm sure I'll be adding more robes as I come across them which your inner geek or someone you love's geekiness will enjoy.
Posted by Lou16 at 2:56 AM