Do You Have These Twilight Barbie Dolls Yet?

I love some of the great collectible Twilight dolls that are available and there are lots to choose from, but when I think of dolls the first name that springs to mind is Barbie. That's why I decided to dedicate this page to the Twilight Saga Barbie Collection of Dolls as opposed to all of the dolls that have been released to commemorate this popular vampire and werewolf saga.

I was very happy to see in the last release of these dolls Esme, Carlise and Emmett dolls released, but the very first ones featured Bella, Edward, Jacob, Victoria and Alice - let's have a look at them all shall we?


The first movie in the Twilight Saga was simply called Twilight and two of the first Twilight Barbies released were from that particular movie. Of course if they were only choosing two what characters could they be other than Edward and Bella.

We were first introduced to Bella Swan when she moved to Forks, Washington to live with her father. At Forks High School she first sets eyes on Edward Cullen and I can still see the look between them when Edward stops a car from crashing into her - the love affair for our generation is about to begin.

This doll is a pink label doll and is dressed in Bella's sensible no-nonsense fashion. Let's face it Bella is far from what my daughter would call a 'girly girl'!

Not only does this pink label doll have the brown/red spiky hair that Edward made famous in the first movie and the fashions he was wearing, but there is also glitter on his head and chest which I think is a really cool touch.


Jacob Black had a fairly small part in the original movie, but when it was time for the second movie in the series Jacob had grown up and he proceeded to spend an inordinate amount of time topless - something girls around the world (young and old) found great pleasure in!

It should come as no surprise that this Jacob doll should be shirtless and it really makes me think of a line from Eclipse where he tells Edward, "I'm hotter than you" - I know when I was in the movie theater it erupted in laughter at that line!


The last two dolls released in 2010 were based on the third film in the series - Eclipse. Alice Cullen, Bella's best friend and Edward's sister was a welcome addition to the Twilight dolls collection.

The second doll was based on the character of Victoria which meant we now had a villain to add to the collection and I must say she looks beautiful with the cascading red hair and totally looks the part that was brought to life by Bryce Dallas Howard. 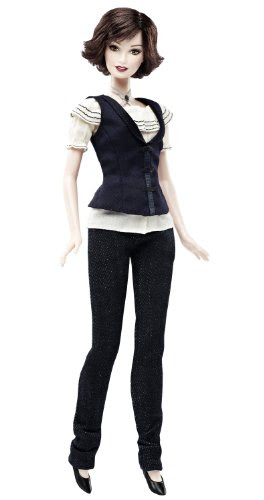 Alice always manages to exude glamour and looks like she could've just stepped off of a magazine cover and this doll manages to capture that beautifully. 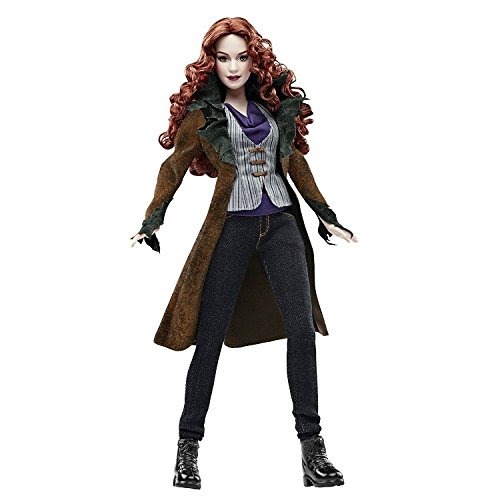 Alice always manages to exude glamour and looks like she could've just stepped off of a magazine cover and this doll manages to capture that beautifully.


Jane is a member of the Volturi which is like Vampire Royalty and we're introduced to her in the Eclipse movie where we find she can inflict pain with her mind. 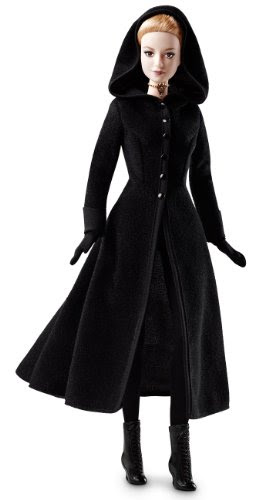 Jane was brought to life by the talented actress Dakota Fanning in the movies.

I like the fact that this doll has red eyes like Jane as I was worried they'd get this detail wrong.


In the fourth movie of the saga we finally see Edward and Bella get married and so when we heard that two dolls were being released from this movie we just knew that they would be based on the wedding and we were right! 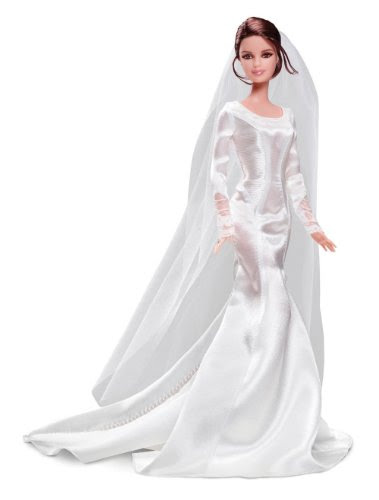 Here comes the bride! When these two say until death do us part half of the audience didn't realize quite how long that was expected to be!

The dress on this doll is a replica of Bella's wedding dress in the movie, this doll is even wearing Bella's engagement ring!

Waiting patiently for his bride to walk down the aisle is Edward in his gorgeous wedding tuxedo and looking very suave and sophisticated.

These dolls aren't just for Barbie collectors, but are must haves for any Twilight fan I believe.

It's hardly a surprise that Rosalie should be debuted as part of the Breaking Dawn Part II release as she really comes into her own when she supports Bella's right to carry a baby to term and you can imagine her being a very protective aunt to Renesmee.

Jasper with his piercing amber eyes looks perfect in doll form - don't you think? It's great to have a doll to keep Alice company at last!


This set of two dolls is a beautiful addition to the Twilight Saga Barbie Collection. Officially Edward wasn't released on his own, although Bella was, I have, however, seen him available on his own through ebay.

Personally I think a set of two is a great way to get these dolls and as the movies are all over it's a lovely momento to have whether you usually collect barbies or not.


I was so happy to see both Carlisle and Esme brought to life as barbie dolls, I'd actually wondered if it was ever going to happen! Carlisle is the head of the Cullens and the adoptive father of Edward, Emmett, Alice, Rosalie & Jasper and husband to Esme - he's also a doctor which makes for easier access to a blood bank although he (and his family) usually feed on animal blood.

Carlisle looks great here in his familiar doctor's coat and even though he's in doll form he manages to exude the calmness that Dr Cullen always seems to have.

Esme looks very glamorous here and I have to say that her purple blouse was my favorite piece out of her wardrobe so this is a great costume selection in my opinion! 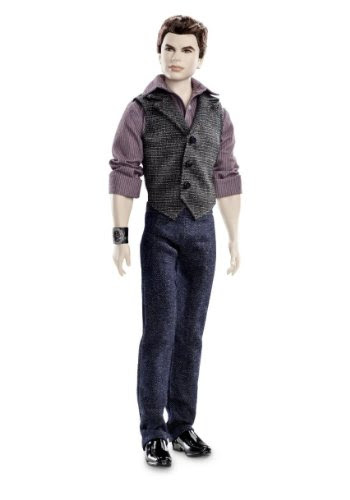 Emmitt is really one of the quiet hunks of Twilight and my one disappointment in the movie saga was that he didn't get a bigger role! This costume captures his size and strength really well and I love how they've even added his Cullen Crest wrist cuff.

I must admit I do constantly change my mind over my favorite, but since the last release when we finally had a Carlisle, Esme and Emmitt that big bear of a Cullen Emmitt has been my favorite doll!
Posted by Lou16 at 3:50 PM